The morning’s forecast predicted rain but I raced the east-flying rain clouds and flew out into the garden for a spot of tidying up.

Just outside our back door, there’s a welcoming, little border, with pride of place taken by a Fuji Cherry. In a few weeks time, its twisting branches will carry a dazzling display of blush-white flowers, but for the moment, the buds are tightly furled and clinging to the bare branches.

At its feet, the Daphne odora is valiantly breaking into blossom. It’s only frost hardy and the last two winters have taken their toll. Some of the glossy, cream-margined leaves have been blackened by frost and others have given up the fight and lie, carpeting the soil.

The feathery green-blond flowerheads of the Stipa calamagrostis have long since faded to beige and the ground beneath is strewn with its straw debris.

It’s all a bit of a sorry sight.

I dig in with my trusty weeding fork, scrabbling amongst the couch grass which sneaks its way in when no-one’s looking. On hands and knees, there’s a whole new perspective opening up.
Poking up through the leaf litter are the green shoots of my Rip Van Winkle daffodils, with swelling buds soon to open into swirling, flouncy yellow-green petals. Downy growth in the Pulsatilla clump is just making its appearance, with the first fern-like green leaf stretching itself out.

And then, one after the other, I spot the shy little Dog’s Tooth Violets, their brown-mottled leaves camouflaged amongst the dead leaves and mud. The creamy buds emerge through the foliage, pointing straight up, but one or two have already stolen a march on the others and the slender, red stems have formed a perfect shepherd’s crook, with the buds nodding at its end. Now all I have to do is to keep watch so that I don’t miss the fleeting charm of their rose-pink turk’s cap flowers.

An attractive tuberous perennial, flowering in spring, its long white tubers giving it its Latin name and the common name of Dog’s Tooth Violet.

Leaves are mid-green, mottled with a rich brown, forming a basal rosette. From the beginning of spring, upright stems, flushed red, appear; each carrying a solitary, nodding rose-pink flower, petals swept back to reveal yellow-tinted bases and prominent purple anthers. 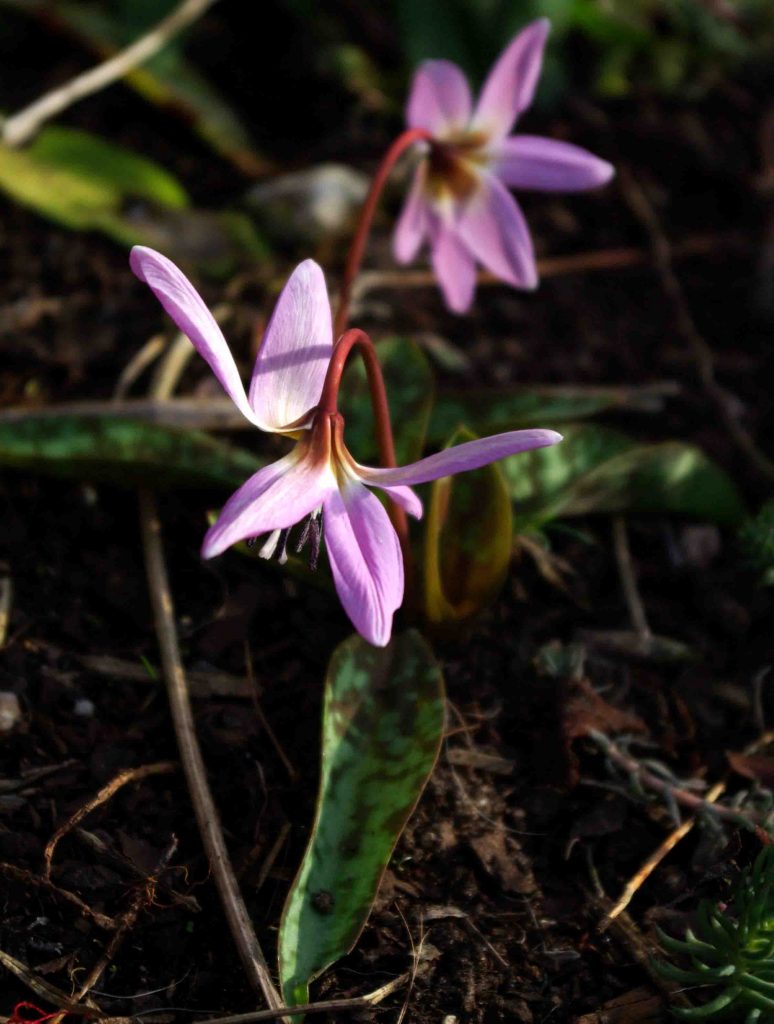 Plant bulbs at least 10cm (4in) deep in autumn. Add grit to heavy soil to improve drainage. Bulbs should be kept slightly moist until planted.

Erythronium dens-canis enjoys shady, moist woodland conditions and can be naturalised in short grass. It dislikes being disturbed, so only divide when clumps become overcrowded. Division can be carried out after flowering, giving the leaves time to wither before digging up the clump. 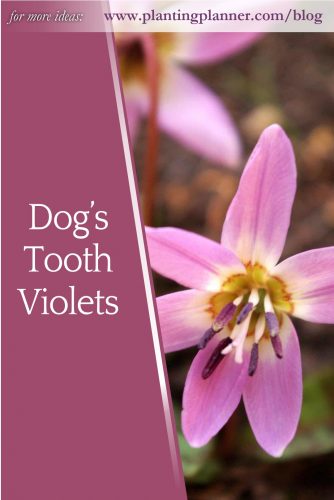