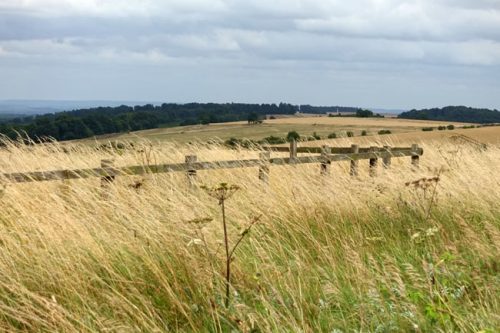 To walk along the Ridgeway is to share a route travelled for more than 5,000 years. Once a series of tracks over the chalk downs in southern central England, the ancient Ridgeway eventually became a National Trail in 1972.

The trail is 87 miles in length, travelling from Overton Hill, near Avebury in Wiltshire, to Ivinghoe Beacon in Buckinghamshire. Ancient sites such as Avebury Stone Circle, the White Horse at Uffington and Waylands Smithy, a chieftain’s burial tomb, as well as numerous hill forts are found along the Ridgeway’s length.

The Uffington White Horse is a Bronze Age hill figure, cut up to a metre deep into the hill and filled with crushed white chalk. Along with other ancient remains on White Horse Hill, it is managed by the National Trust.

High up on the hills, there are far-reaching views from the Ridgeway’s commanding position. The view from White Horse Hill encompasses six counties.

The Downland tracks are bordered by swathes of grasses and wildflowers – resilient plants well-suited to the tough conditions on the chalk grassland.

Wildflowers are the ancestors of our cultivated garden flowers, finding their way in some form or other into our garden borders. Chalk and limestone soil support a great range of flower species, and many of the flowers spotted on the Ridgeway could have been equally at home in a garden border.

Achillea millefolium (yarrow) is a graceful, upright perennial, with flat-topped flowerheads from early to late summer. The grey-green leaves are deeply divided, giving a feathery texture.

Many cultivated varieties are available, in colours ranging from muted terracottas to deep wine. They are attractive to bees and butterflies and make great structural plants for garden borders and containers.

Centaurea nigra is a grassland perennial, with thistle-like flowers from early summer to early autumn. Commonly known as black knapweed or common knapweed, it has a host of other common names in different regions of the country, from the charming ‘tassel’ and ‘Spanish buttons’ through to the less appealing ‘loggerheads’, ‘iron hard’ or ‘club weed’.

Centaurea nigra is perfect for wildlife gardens. Rich in nectar, the flowers are loved by bees and butterflies. When the flowers fade, the seedheads are enjoyed by birds.

Both field scabious (Knautia arvensis) and small scabious (Scabiosa columbaria) are found on the Ridgeway. They are perennial plants, each with pale mauve pincushion flowers, on slender stems. Field scabious is taller, hairier and has four petal-lobes on each individual flower – small scabious has five. Scabious flowers are pollinated by bumblebees and butterflies.

Silene dioica (red campion) is a short-lived – but long-flowering – perennial, with flower stems up to 1m tall. The pretty, notched rose-pink flower heads are also attractive to pollinators, including long-tongued bumblebees, butterflies and hoverflies. Named varieties include ‘Firefly’, up to 60cm tall with double flowers, and ‘Rollie’s Favorite’, growing to 45cm in height.

Geranium pratense (meadow cranesbill) is a clump-forming perennial, with deeply divided leaves. Its violet-blue flowers appear in summer, followed by pointed ‘bill’-like seed pods. The nectar-rich flowers are adored by many species of bees.

Though the wildflowers of the Ridgeway cope well with the fast-draining, alkaline conditions of the chalky grasslands, they are also very tolerant of other soil types, apart from water-logged clay. Look out for these wildflowers (or some of their cultivated cousins) in your local garden centre. They are perfect for creating a wildflower meadow or wildlife-friendly haven in your own backyard. 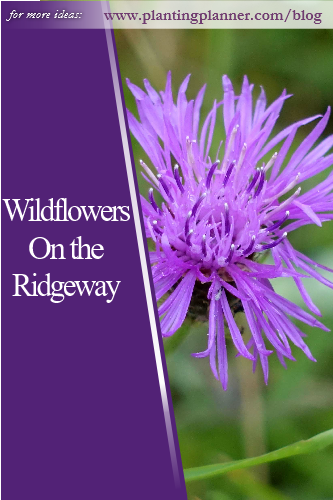