Some plants make perfect bedfellows. Here are some of my favourite plant combinations.

Sometimes, the perfect combination happens almost by accident. The mauve flowers of Erysimum ‘Bowles’ Mauve’ are echoed by the starry globe of Allium cristophii, opening in the background and the bracts of Acanthus mollis. The fresh green of the miscanthus grounds the group, while the soft petals of the poppies dance above, bringing a lighter focal point to the display. How perfect is that?

In my photo, Allium cristophii is peeping shyly from behind a mound of foliage. But it is no shrinking violet. It is one of several in the border and they make a spectacular display. The grey-green, strap-shaped basal leaves wither before the flowers appear in early summer. The flowers themselves are fabulous – huge spheres of many star-shaped, metallic flowers.

Some of the big alliums have very dense flowerheads, like rounded lollipops, but I love this one for its more open, ethereal look. Each star has room to spread out and be admired. Allium cristophii  has gained the RHS Award of Garden Merit (AGM) and grows to 50cm in height. It likes well-drained soil in full sun and is a source of nectar for bees.

The flowers fade to large, attractive seedheads which persist into winter. These can be enjoyed as they are or sprayed silver for winter decorations.

Acanthus mollis, charmingly known as bear’s breeches, is a clump-forming, semi-evergreen perennial with bold, deeply-divided leaves and handsome, vertical flower spikes.  In summer, many spires of white flowers, protected by mauve or mauve-green bracts, tower up from the foliage.

A striking architectural plant, Acanthus needs space to spread out (1.5m tall by 0.9m spread) but is easy to grow in fertile, well-drained soil. Acanthus mollis thrives in sun or light shade, enjoying woodland conditions probably more than other variety of acanthus. Its long roots make the plant difficult to eradicate if moving to a different position in the garden. Remove as much of the root as possible as any piece of root left will develop into a new plant.

An attractive, long-flowering, evergreen perennial, its narrow grey-green leaves form a dense mound of foliage. Long racemes of mauve flowers appear from late winter and right through the summer. Erysimum likes well-drained, neutral to alkaline soil in full sun. Though short-lived, the plant can easily be replaced with cuttings.

Deadheading will keep the flowers coming. Erysimum is a good early source of nectar for bees and butterflies, but it may need winter protection where frosts are severe. It has an AGM and grows to 75cm by 60cm.

Miscanthus sinensis ‘Nippon’ is a very elegant, ornamental, perennial grass. Its deciduous, mid-green leaves, with narrow white midribs, arch gracefully. In late summer,  feathery, reddish flowerheads appear, becoming silvery-beige as they fade to plumy seedheads. These persist through the winter, creating an attractive winter feature. Flower and seedheads are particularly effective when back-lit by the sun. The seedheads provide food for birds.

Though miscanthus prefers full sun and moist conditions with good drainage, it will tolerate any reasonable garden soil, provided it does not become water-logged in winter.

In autumn, the foliage takes on russet tones before fading to buff. Like other ornamental grasses, Miscanthus sinensis is easy to care for. Simply cut back old stems to ground level in early spring before new growth starts.

The poppy I originally planted in my garden was ‘Coral Reef’, which has ruffled, papery, coral-pink petals, with purple-black blotches at the petal bases, surrounding a circlet of dark stamens. Oriental poppies are sun-loving, herbaceous perennial, which appreciate support early in the growing season to keep them from flopping. Oriental poppy flowers appear from late spring to mid-summer and are followed by enchanting seed pods, coveted for adding to bowls of pot-pourri for winter displays. The foliage will die back after flowering and needs to be cut back almost to ground level at this stage. However, many will start to grow again by autumn and may provide a second flush of flowers later in the summer.

Poppies will spread by self-seeding but their seeds are unlikely to come true. You can always divide the original plant or take root cuttings if you want to make sure you have more of the same.

The poppy in my photo is probably a lighter coloured seedling of the original, and serendipitously turned out to be a perfect highlight for the border plants. 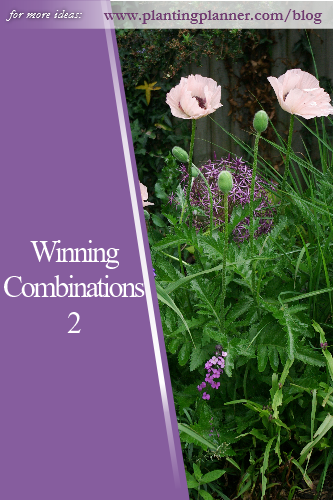