18,000 years ago, the cave at Lascaux, in southwestern France, was visited by a group of prehistoric hunters who set about creating their masterpieces. With pieces of iron oxide, manganese oxide, charcoal and kaolin, and using the cave walls as their canvas, they painted their subterranean cathedral.

In earthy shades of reds, browns and yellows, nearly one thousand animal figures – horses, aurochs, bison and red deer – clamber, jump and charge across the walls of the underground gallery. The story of how the cave entrance was discovered in 1940, in a country ravaged by war, by an 18 year old boy and his dog, seems almost as much a fairy tale as the idea of prehistoric man, clutching his stone lamp in the darkness of the cave, and taking up his plant-based brush to make the first stroke.

The thousands of visitors to the caves took its toll on the paintings, which quickly began to deteriorate, and the caves were shut to the public in 1963.

In 1979, Lascaux was listed as a UNESCO World Heritage Site, and twenty years after closing to visitors, a replica of part of the cave system, known as Lascaux 2, was opened. The latest facsimile, Lascaux 4, uses digital technology to create a replica of the whole of the original cave, which perfectly reproduces the contours and dimensions of the original walls and paintings.

In 2016, the International Centre for Cave Art, housing Lascaux 4, opened at the foot of the Lascaux hill.

I wasn’t sure how I’d feel about visiting the replica. I wanted to get as close as possible to the real thing, but I wondered if there would be a sense of anti-climax, knowing that what I was seeing was a 21st century copy. In fact, the sense of wonder was still there. It even felt like a real cave, dark and cool, and the first painting, emerging from the blackness by the arrow of light from our tour guide’s torch, was enough to make the hairs stand up on the back of my neck.

The new centre is half-buried, sinking into the landscape, but determinedly modern, with its angular lines and an enormous wall of glass. The planting in front is modern too.

Colours are predominantly blues, greens and soft purples, with splashes of bright yellows and oranges.

The origins of the current trend for ‘prairie’ or naturalistic planting can partly be found in the Dutch Wave movement of the early ‘80s in the Netherlands, associated with garden designer, Piet Oudolf.

Those perennials which flower late and develop appealing seed heads are especially valued. Echinacea purpurea flowers from late summer into the autumn, then as its drooping petals drop away, its dramatic seedheads provide further interest in late borders.

A pink echinacea adds a splash of vivid colour in the late summer borders.

Persicaria amplexicaulis ‘Firedance’ is one of the perennials favoured by Piet Oudolf. A clump-forming perennial, it has spikes of red flowers from mid-summer and into autumn.

The overall effect of prairie-style / naturalistic planting is soft and dreamy. Walking through the borders should be like wandering through a flower meadow.

At Lascaux, paths of chipped bark meander through the waist-high plants to provide close-up views.

The planting, of course, is far from ‘natural’ but is carefully designed to give a naturalistic feel. Plants are arranged in drifts and mingle with others. Colours and groups are repeated at intervals.

Tall stems support each other, rather than being tied and restrained by stakes and wires. There is a wonderful juxtaposition of shapes and textures and colours, almost too varied for nature to manage by itself.

Outside the modern, glass-fronted building of The International Centre for Cave Art, the misty swathes of planting ebb and flow. But they are carefully bordered with immaculately manicured lawns. Like the artists of long ago, the gardeners of Lascaux are fully in control here. 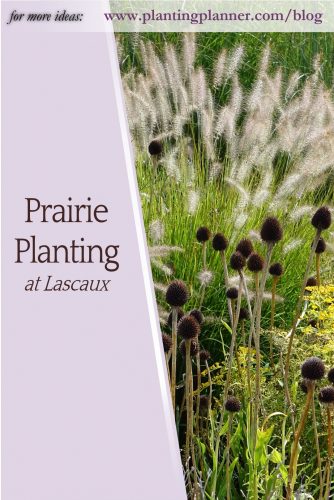