May 1st – International Workers’ Day or Labour Day – is a public holiday in many parts of the world. It coincides with the much older traditional festival of May Day – springtime festivities, associated with May Queens and ribbon-dancing around the maypole. In France, it is also the Fête du Muguet, the day when the little Lily of the Valley, with its delicate sprays of white bells, is elevated to the position of celebrated star for the day.

The earliest May Day celebrations honoured the ancient Roman goddess of flowers, Flora, and flowers inevitably feature in many of the traditions associated with this day. Traditionally, “May baskets”, containing flowers or sweets, were given at this time of year. They would be hung anonymously on the doors of friends or neighbours.

A May crowning – honouring the Virgin Mary, by placing a crown of flowers on the head of her statue – takes place in many Roman Catholic parishes. Young girls in white dresses carry flowers to place on the head of the statue. Throughout the month of May, the flowers may be replaced to keep them fresh.

A charming tradition, in France, is La Fête du Muguet, the festival of the Lily of the Valley. It dates back to the 16th century and is associated with the ill-fated Charles IX of France, son of Catherine de’ Medici.

The young King Charles – he acceded to the throne at the age of 10 and died before reaching the age of 24 – was prone to illness and dementia. He suffered from fits of violent, mad rages and was responsible for the massacre of thousands of Huguenots, in what became known as the St. Bartholomew’s Day massacre.

Despite his gruesome history, however, he has left behind a much more pleasant legacy. In the spring of 1560, the young prince was apparently presented with a sprig of the sweetly scented lily of the valley (convallaria majalis or muguet in French) as a lucky charm. He was so delighted with the gift that, each year on the same day, May 1st, he gave sprigs of lily of the valley to the ladies at court.

The custom continues in France, with fragrant posies of lily of the valley being presented to loved ones as a token of appreciation or good luck charm on 1st May. Street stalls and supermarket shelves are laden with little pots and tall, elegant vases containing sprays of the dainty, bell-shaped flowers, rising from a scroll of bright green leaves. More than 75 million sprigs of the flower will be sold across France for the Fête du Muguet.

The tradition has been incorporated into Labour Day activities too. During the Second World War, a buttonhole of eglantine rose, which had been worn by marching workers as a symbol of the Left, was officially replaced by a spray of lily of the valley.

There are now special rules in France allowing lily of the valley to be sold on May Day without the usual taxes having to be paid, provided the flower is homegrown or gathered from the wild. Fortunately, the little plant’s propensity to spread by means of underground runners, means that it copes well with any amount of cutting back and will continue to bloom undeterred in subsequent years. 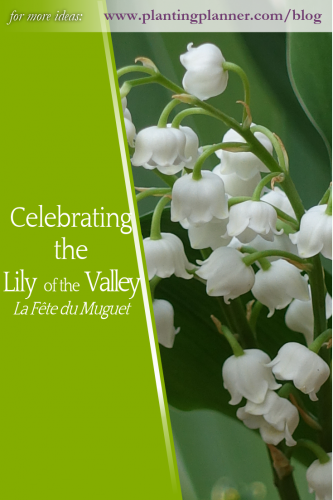