When the children were small, I was quite taken with the idea of creating pathways around the garden. Trails for chasing round and doubling back on. Routes for Easter Egg Hunts. A pergola, clothed in climbers, providing hiding places for leaping out of on dark nights. For small children, plants didn’t need to grow very high before they could be ducked behind and screen someone in a game of Hide and Seek.

One year, we had a Princess and Prince themed birthday party held in the garden. The highlight was a game we devised which entailed leading the party-goers one by one around the stepping stone pathways on a hunt to slay the dragon. The children waited, quivering with excitement for their turn to set off, through the pergola, round the stone circle, climb the tallest mountain (or was that the garden slide?) and a final swoop down the slide into the open doorway of a pop-up tent where a dragon soft toy lay in wait.

Every Hallowe’en, we carved pumpkins and waited for darkness to fall to light our jack o’ lanterns. Set at strategic points in the garden, they cast eerie, flickering shadows. With clouds racing across the ghostly moon, little figures darted round the suddenly unfamiliar night garden, screaming in delight when the adults pounced from behind bushes.

There was an unexpected bonus though. Besides creating an area which was fun for small children to play in, the little pathways and screens help to make the garden seem much bigger than it is in reality. It is impossible to see the whole garden at once. You have to wind through the pergola and peer round the arches before the next section is revealed.

It also makes a stroll around the garden a whole lot more interesting. There is a path to follow and a chance to brush up close to the plants bordering it. The pergola provides a cool, shady contrast on a hot summer’s day.

At the top of the garden is the wild area – the part furthest from the house and consequently, the bit left to last on weeding circuits! Still, taking a deliberate wander up there can reveal hidden delights. Especially in late spring, when the self-seeding columbines, forget-me-nots and candelabra primula create a breath-taking, sun-dappled secret garden under the silver birches.

It has a tendency to self-sow in the garden and will naturalise readily to form an impressive colony. Where conditions are ideal, it will spread vigorously. 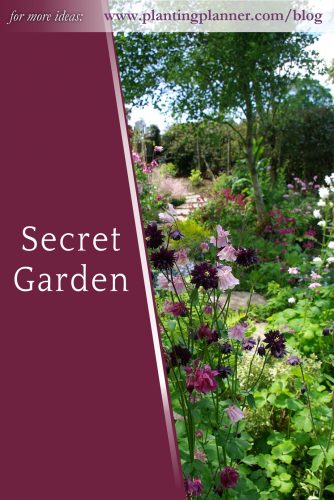