Last spring, I decided it was time to give my little courtyard a make-over, by potting up three matching containers. My challenge was to choose plants which would provide interest all year round and continue to look good the following year. It was hard work restraining myself over the cold months but, eventually, in early spring, I allowed myself to indulge in my favourite pastime at the garden centre!

Buying plants earlier in the year means that the plants are small – and I did have to take some on faith that they were going to survive and grow more than the one flimsy leaf they came home with – but they are usually cheaper, so you can get a lot more for your money.

Because these pots were designed to brighten up the courtyard all year round, I chose at least one evergreen plant per pot, as well as plants which would provide interest at different times of the year.

The Gaura in this pot flowered magnificently for months on end, but when it eventually faded away, the purple heuchera and red hook sedge (Uncinia rubra) kept the display going well.

I potted up each container with at least one tall, architectural plant, a couple of mounds for contrast and a trailing plant to tumble over the edge. This is known as the ‘Thriller, Filler, Spiller’ technique – read more about it in the post below. I also added a handful of Muscari bulbs, left over from planting elsewhere in the garden.

Here are my recipes for all-season container plantings:

The containers were a picture through the spring and summer. Within a month, the heuchera had put on fresh new leaves, the gaura was growing strongly and the dianthus was flowering prettily.

In early May, the iris began to flower, its soft yellow standards and dark red falls echoing the dark heuchera and the purple and yellow pansies in the adjacent containers.

By the end of May, the salvia was throwing up spikes of deep blue, two-lipped flowers, contrasting with delicate sprays of pink heuchera flowers.

In early June, the vertical stems of gaura, salvia and rosemary (with the tall iris leaves still showing behind) created vibrancy and movement, while the mounds of heuchera and geranium kept the containers grounded.

Planting herbs in your all-season containers provides a ready source of fresh flavours to add zing to your cooking. The zesty taste of Thymus × citriodorus is perfect for flavouring roast meats and vegetables. The edible flowers have a lemony flavour too.

Into the autumn, the late flowers of Achillea millefolium ‘Cerise Queen’ and Anemone hupehensis ‘Praecox’ took over from the fading summer bloomers, while the evergreen plants continued to work their magic in each of the three pots.

During the winter, I added some winter-flowering pansies, which did a great job of keeping the pots looking good through the cold months and into early spring. The muscari popping up through the over-wintered planting was a delight. Next year, I’m going to multiply this effect by adding more bulbs of tiny spring flowers.

Uncinia rubra will only tolerate full sun if kept constantly moist. I thought I had lost it, but this spring, it has fought back and is putting on new growth.

The wonderful heuchera has fresh, soft pink leaves now, which darken to a deep red purple. Its foliage looks fantastic all year round and in a few weeks’ time, it will send up sprays of tiny pink flowers again.

Planting pots for year round interest doesn’t mean that the pots will continue to look good forevermore. Over time, some plants will grow too big for the space and some will need dividing to keep them in good flowering form. But it does mean that you won’t have to ditch a whole container of planting every time the seasons change. Of course, you could use a slow-growing shrub or dwarf-evergreen, which will last for several years without needing much effort on your part. If you enjoy watching the seasons change in your garden, though, you might well prefer to watch them change too in your garden containers, where new plants push up into the limelight as other quietly fade away. 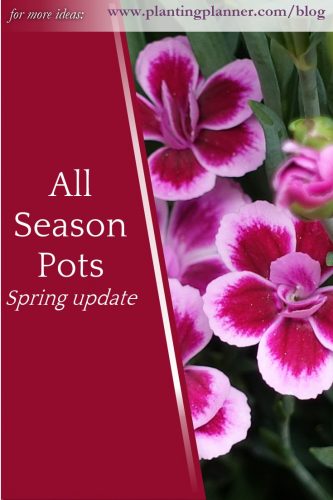