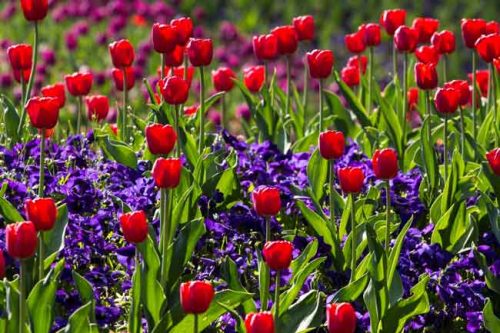 Though tulips are as quintessentially Dutch as windmills and clogs, they are actually an Eastern flower, growing wild along a narrow belt, stretching from Ankara in Turkey to the mountain ranges of Pamir-Alai and Tien Shan in Central Asia. The word tulip itself is derived from the Turkish and Persian names for turban, named for the resemblance between the flower’s petals and the turban’s overlapping folds of material.

A prized flower in Turkey, the tulip later became a symbol of the Ottoman Empire, with a period during the early 18th century – noted for its prosperity and relative peace – being labelled the Tulip Era. The classic tulip motif, with elongated petals, often featured in Ottoman art.

A hundred or so years before that, the tulip, of course, had been the catalyst for wild speculation, followed by a spectacular collapse in price, known as Tulip Mania, during the Dutch Golden Age.

The exotic and previously unknown tulip was probably first introduced to Europe when the ambassador of Ferdinand I, the Holy Roman Emperor, to the Sultan of Turkey, sent tulip bulbs and seeds to Vienna from the Ottoman Empire in 1554. From there, they spread to other European cities.

The Dutch East India Company was set up in 1602 and Amsterdam was becoming a hugely important port. It was a time of great prosperity for the Dutch, with art, architecture and horticulture experiencing an upsurge in popularity. The pioneering botanist, Carolus Clusius, had a collection of tulip bulbs which he planted in his private garden, spending years studying them to try to establish what caused some of the bulbs to ‘break’, creating new variations in colour and pattern.

We now know that this is the result of a virus, but the novelty value of these unpredictable and enchanting varieties caused their prices to soar. Tulip bulbs changed hands at ever-increasing prices, until finally the bubble burst in February 1637.

Some of the wildest myths about the Tulip Mania period have been debunked by Anne Goldgar in her book, Tulipmania: Money, Honor, and Knowledge in the Dutch Golden Age. The tales of financial ruin were certainly exaggerated and some of the stories were simply not true – for example, that of a sailor thrown into prison for accidently eating a tulip bulb, having mistaken it for an onion. Goldgar, researching through the archives, discovered that many of the rumours originated in pamphlets published after the event, often by Dutch Calvinists, eager to persuade people that chasing untold wealth was an ungodly pastime!

Still, the tulip is rather alluring and it’s tempting to believe that its elegance and sophistication could cause speculators to lose their senses, whilst in thrall to its beauty. Fortunately, you won’t have to invest your life savings to enjoy tulips in your back garden. A pack of 10 or even 20 bulbs can be bought for under £10 today.

A glance at the catalogues reveals a bewildering array – single, double, early, late, fringed, parrot… There are over 3,000 registered varieties, divided into 15 groups. There’s even a collection named after Rembrandt, who would have been painting at the time when the striated variety, named after him, could have cost more than a house! They do look as if someone has daubed them with a paintbrush, though, to create the streaks and splashes of colour.

Here’s a selection of tulips to turn anyone’s head:

Tulipa ‘Black Parrot’ is a member of the Parrot Group of tulips, which has flamboyantly frilled petal-like tepals. The cup-shaped, feathery flowers, appearing in late spring, are a deep purple-red.

For simple elegance, you can’t beat Tulipa ‘White Triumphator’, from the Lily-flowered Group of tulips. Flowering in late spring, it carries graceful, pure white flowers, with pointed petal-like tepals flaring at the tip.

Tulipa ‘Queen of Night’ belongs to the Single Late Group of tulips, which flowers in late spring. The sumptuous, cup-shaped flowers are a sultry dark red-purple.

For an early flowering tulip, try Tulipa ‘Red Riding Hood’. A member of the Greigii Group of tulips, ‘Red Riding Hood’ has deep red bowl-shaped flowers, scarlet inside and with a black base.The strap-like leaves are blue-grey, attractively streaked maroon. 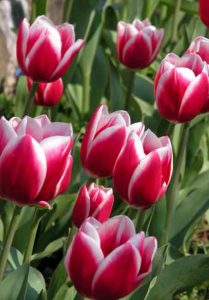 Tulips are elegant perennials, growing from a bulb and flowering in spring.
Tall stems bearing the flowerheads rise from a basal clump of strap-like mid-green foliage.
The beautiful flowers come in a variety of colours and forms.

Deadhead after flowering but leave the foliage to wither – for at least 6 weeks – before cutting back.

Feeding the foliage with a high-potash liquid fertiliser will boost flowering the following year.

Tulips are not reliably perennial. They should be lifted after the leaves have withered, stored in a cool, airy spot and replanted the following autumn. Alternatively, plant them deeply – 20cm (8in) or so – to give them the best chance of survival and top up each year to maintain the display. 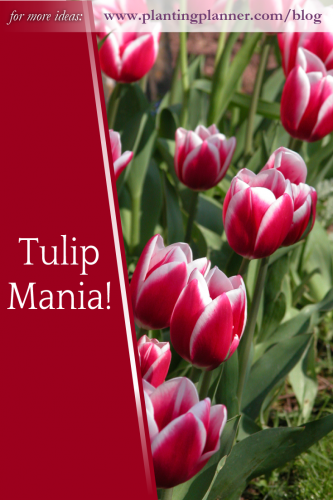